I have scrubbed my hands until they are pink, yet still they are not completely clean. It’s the fingernails and the creases at the knuckles; they still show signs of the thing that I did. The thing that changed me forever.

The alternator is a mechanical device under the bonnet of a car that converts a portion of the engine’s power into electricity. This electricity is used to make sparks, charge the battery and power the electric and electronic devices on board. An alternator is an essential component of a modern motor vehicle. By essential, I mean that the car doesn’t function without one, and last week Kirsten and I learned this when her Volvo stopped going.

Having just spent $1200 on repairs for the shitbox, we were reluctant to shell out any more. We rang around, got quotes. The quoted prices ranged from $250 to $380, for a second hand alternator and installation. We didn’t really see the point of throwing that much money into the Volvo pit, so we explored other options. We could get a second hand alternator for $40. I decided to do the work myself.

So that is how I found myself on Sunday morning, dressed in my least fashionable clothing with an alternator in one hand and a toolbox in the other. Armed with some basic instructions (“take off the belts and replace the alternator“), I got started. The first step was to loosen the top bolt (of two) that hold the alternator in place which allows it to swing slightly, thereby reducing the pressure on the two belts that transfer power from the engine to drive the alternator. This allowed me to remove the belts from the alternator. I then disconnected two of the three cables that protruded from the rear. I then completely removed the bolt.

Stage One over, I grabbed a towel and a few tools and climbed under the car, the only place where I could gain access to the other (main) bolt. After a bit of contortion and perhaps 10 minutes of awkward unbolting, the alternator was almost free. I only had to disconnect the final cable and lower the alternator out to the towel. Halfway there! 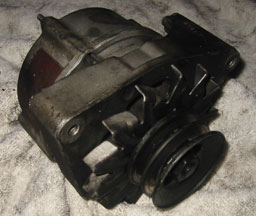 the bad alternator
I climbed out and proceeded to clean all the contacts in the hope of increasing my chances of success. The cables were very dirty. Whilst not as dirty as the one I removed, the replacement alternator was clearly not new, and needed a bit of a clean itself. I only cleaned the functional bits.

I was on the home stretch at this point, all I had to do was install the replacement, and I had the advantage of now knowing where it all went. All the under car work was pretty much the same as removal in reverse, it was done in 5 minutes. All I had to do was connect the top two cables, partly screw in the final bolt, attach the belts, and tighten the bolt with the belts tensioned. Easy? No.

The damn bolt. I hate it. That bloody bolt took me 90 minutes to screw in. Due to the awkward positioning in the engine area I could only turn the bolt a quarter turn at a time – and even that was broken into two separate movements as I had to turn the spanner over halfway to fit. I learned that my supposedly good shifting spanner is good at one thing: shifting. On its own. Luckily my Dad had offered to help, so I took him up on his offer. He arrived half an hour later with Honey and a small 9mm spanner. What a luxury this tool was, perfectly sized between my 8mm and 10mm. I had the job finished in 10 minutes.

The major work over, I was faced with one final task: jump starting the car and seeing if the alternator, um, alternates. This was a job for the NRMA man. It felt so good once the car had been started and it kept going! That means that it is making electricity, there was certainly none in the battery. It works!

The final test was today when Kirsten took the car for the 80 minute return trip to work without any problems.