Today we went for a walk in the Veluwe which is a kind of National park. I enjoyed it a lot because I was walking in a completely new environment with strange trees and landscapes. The park contains some of the hilliest terrain in the Netherlands and is favoured by runners and cyclists for the challenge. Some of the hills can be up to 5 metres high!

In the middle of our walk was an old building which is now a sort of restaurant called a pannekoekenhuis. Here they sell very large Dutch pancakes which are the size of pizzas. The pancakes can be either sweet or savoury. I had a pancake with onion, cheese and tomato which was very tasty. Everyone had a little taste of everyone else’s pancake and it was clear that once again I had chosen the best one. 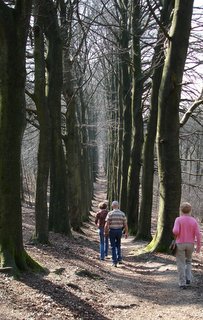 On the return leg of the walk we went through a long and marvelous corridor of really old trees, I took photos but my little lens does not do them any justice. When we emerged from the almost leafless forest we came to an area of small farms. Very small. The size of football fields. It was here that I saw something new: the sheep have tails. Upon pointing this out they thought that Australians are barbaric for docking the sheeps’ tails and could not comprehend that it is cruel not to. I am learning from my travels that cultural filters really do colour a lot of our perceptions.

After we finished our walk we drove through the Posbank, a hilly area in the park and stopped at an old stately home (which they called a castle) that was about 700 years old. We went to a nearby cafe and I tried to order a cup of tea (kopje thee) which completely confused the waitress who thought I said koffie thee (coffee tea). She should learn to understand her own language.

For dinner we had Chinees, which is an entirely Dutch food that no-one in China has ever eaten. Writing this 2 weeks later, with a bit more experience, I have concluded that the Dutch make things Chinese, Oriental or Indonesian by adding sugar and crushed cloves. So for dinner we had Nasi Goreng (Bahasa for “Fried Rice”) which in NL is a kind of boiled white rice with a few peas in it, Bami Pangang which is pork with a sweet clove sauce, and Foo Yung Hai, which is a plain omelette with a sweet clove sauce. I considered that perhaps Asian food in Australia is also a locally adapted food, but my experiences in Malaysia speak otherwise: everything tasted the same as in Australia. Perhaps I can expand on this when i have lived here for more than 2 weeks.