I had a great Christmas with (half) my family. My best sister, Michelle, was the host and she put on a great spread. Sampson, my beautiful 16 month-old nephew, was the centre of attention – the day was really all about him. He loved it and has already worked out that he can control us: all he has to do is clap his hands and all nearby adults immediately join in, including me. My contribution for the day, apart from the general awesomeness of my mere presence, was that I cooked a stamppot. I don’t think it was the best one I ever made but, of all the food served, the stamppot was the first to run out. Sampson loves it. I am glad. My stamppot kicks the arse of any Dutch stamppot.

On Boxing Day afternoon I sat down for a bit of coding that I had been thinking about for a while. It is nice to have an opprtunity to geek out alone without the nagging responsibility of client work. It was not to be, however, as walkingrek called me and invited me to her house. She was about to crack open a bottle of wine that I had bought for her the other day and wondered if I might join her. 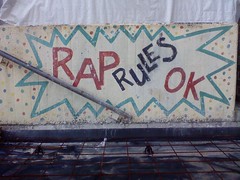 Fifteen minutes later I was in Stanmore with walkingrek, sitting on her porch in the sun and enjoying a nice drink. During my Christmas shopping with Stacey I had been in a Reject Shop and bought for myself a safety baseball/softball bat and ball. They were in my car.

We walked up to a local schoolyard for a game, it was great fun. We both kicked arse. When retrieving the ball from one of Bek’s awesome hits we both noticed a “graf” wall, and it was imperative that I take a photo. God bless the camera phone – it takes shit photos but at least it is always with me.

It is safe now to publish that Bek has asked me to move in with her. It is safe because I don’t have to worry about my landlord finding out I am looking, and pre-emptively evicting me. I don’t have to worry about this because yesterday both Sonia and I were kicked out of the house. I was told in a “oh, by the way…” fashion, with much less seriousness than if I had wasted electricity by leaving the hall light on whilst in the bathroom. Sonia was told by SMS. The news had no emotional impact on me at all, except perhaps a feeling of relief. Melvin’s reign of terror is over.

I have been hanging out with walkingrek quite a bit lately, reconnecting. It has been good. We are both grownups now and it makes a difference. We have always been very close, had a special understanding that others lack. Perhaps we interact best on the dancefloor, unspoken. We both see the same things and look at each other at the same times. I can mess with her without words. We like very similar music and feel it, I think more deeply than the average suburban punter. It is good to have her as a friend again.