I spent a lot of time with Claudia over Easter. I like her. She gave me a three-day ticket to The Great Escape, a music festival held at the Newington Armoury, and we went together. We are lazy and slack and night-owls, so we only went at night. On Friday night we saw Wolfmother and some random bands. Wolfmother was rockin’, I really enjoyed seeing them and especially dancing with C in the rain. 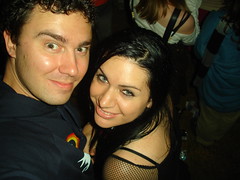 On Saturday night we met up with some of the Party Posse, Dr Emo and Mr Jolly. We caught Missy Higgins and Jon Butler, both were awesome. It was raining hard and, depite our ponchos, we were saturated. I escorted C to her car. She was concerned, when stepping on the grass, that she might be treading on ants. “Do ants have guts?” she wondered. Weirdo. Emo left, but Mr Jolly and I stayed and saw some more random bands in the Tin Shed. A couple of girls came over and one slored onto me, complimenting me on my height. I was unreceptive but she kept trying. I enjoyed the lap dance.

At midnight we were kicked out. Exactly as I left the gate I received a call from my friend Nicola, inviting me to her house. She was there with her husband, Greg and Walking Rek was on the decks. I had offered Mr Jolly a lift home, so I took him with me. We had a few drinks and a catch-up. It was good to see them again. Nicola has been my friend since the mid-90’s and I have lived with her twice, Greg one-and-a-half times.

On Sunday we were unable to go, as Claudia had a family emergency and I didn’t really want to go alone. She came over to visit me, though, which made me especially happy. After she left I had a date with Mr Erick Morillo at Home, a Party Posse event. We met up at DJ Curacius’ office for some pre-dance drinks and got to Home at about 11PM. I ran into my hairdresser, Hani, when I was catching some air on the balcony. I also gave Anna a friendly slap on the bum. I didn’t know it at the time, but she was not pleased and deleted me from myspace. This is the worst thing anyone can do.

Erick Morillo came on at about 1AM and got the crowd jumping. His set consisted of Phases, which he would announce at the transition. There was a latin phase, a novelty. He is renowned for playing for whatever length of time he feels like. This night he felt like playing for eleven hours, until noon on Monday. I was weak and could not do it. DJ Cue and I left at 8AM and walked back to his place, stopping to check out the Dutch snackbar near the old SegaWorld. They have brootjes kroket and frikandel. I will be returning when they are open.

Cue and I settled into his lounge with beers and put on Family Guy. We fell aslepp almost immediately. I woke, seated, covered with a blanket, and was informed that I had fallen asleep with the beer clutched so tightly in my hand that they couldn’t get it out. How Aussie is that?