Last night I uploaded some photos from last month’s Europe trip. Some might seem familiar as Mel and Jem STOLE some of my IP and put them on their own blog. I mentioned this to Adam and his theory is that since their website is hosted on my server, technically it is me that is stealing my own IP.

Below is an example photo from the night of Koninginnedag. At the time, fuelled by Dutch beer and chocolate, we thought it was the Ultimate Party Photo. In the cruel light of day, however, the photo seemed slightly less ultimate. 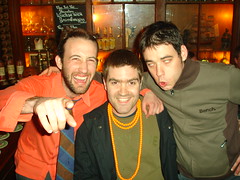 John is modelling my patriotic orange beads, which I bought from a lady’s neck on Koninginnedag last year. I like Koninginnedag in Amsterdam, although Amsterdammers typically leave the city for that weekend. I think I will have to make it an annual pilgrimage.